We are a full-service print facility, built on over 40 years of experience. Grand format prints, custom banners, laminated custom signs and posters are our specialty.  You name it, we can make it. We do LARGE format printing with no size limitation.

We work around the clock to make sure your project goes right.

Our slogan is “Fast, Beautiful and Dangerous”. As most of our projects are for the film industry, we operate on an intense, fast basis with a can-do attitude.  You can rely on us for solutions and to get the job done. When others say “whatever”, we say “whatever it takes”. 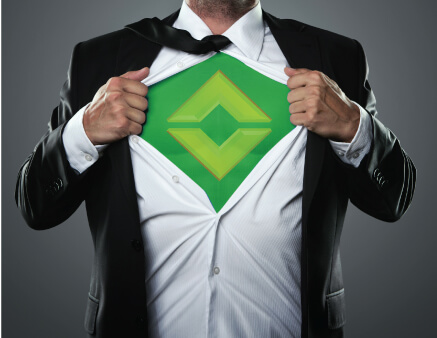 The Collins Visual Media Crew aka LA’S MOST WANTED

At 21 years old, he moved to Los Angeles, continuing to paint and fabricate signs for buildings, storefronts and events. As technology advanced and printers came on to the scene, sign painting became less and less needed. George, keeping up with the times, bought his first print-cut machine, creating stickers and decals. As time went on, he purchased more and more printers and equipment.

George is the kind of person that would make anything go right, no matter what. He’s a problem-solver. And he’s fast. Super fast.

This was much needed as the film industry started evolving and more and more commercials were being made. George started making signs and props for the entertainment industry on a regular basis. He would go on set and had the opportunity to create props around celebrities such as Justin Timberlake, Brittany Spears, JZ and more.

George continues to keep on top of the ever-changing technology, having purchased a fabric printer and the largest printer in the world, in order to create seamless, massive prints. His team has also expanded to include several top-notch designers, production managers, fabricators, installers, and administrative personnel making up a hard-working, dedicated crew ready for action.

“The Beginnings of Tomorrow” Article in Topeka Newspaper

Topeka [Kansas] teenagers have put the American system of free enterprise into practice this summer, turning vacation time into profits. And there’s no lassitude in their laissez-faire system. The labor market told them: “You are too young to be hired as a sales clerk or soda jerk.”

Putting their talents to test, the teenagers answered: “Then we will find our own work, go into business for ourselves.”

And they did. They have mowed lawns and babysat, refinished furniture and painted signs, taught classes, washed cars and bathed dogs.

Fourteen-year-old George Collins, 2001 Hudson, opened a sign painting shop in the garage behind his home and has “brushed up” about $1,000 in business this summer. He explains that only half of the amount is profit, but for a beginning businessman the sum seems auspicious.

He claims the majority of Highland Park merchants as his customers and was commissioned to paint a “Welcome to Highland Park” sign by the Boosters Club. The red and green sign stands on 15th Street hill at Hudson.

George doesn’t remember when he first became interested in art. But he sketches still life, landscapes and portraits on any piece of paper he can find – sacks, wrapping paper, cardboard. He painted his first sign for pay when he was 10.

“I lettered a truck,” he recalled. “And it wasn’t too good.”

When he was a sixth grade student, his classmates and teachers discovered his talents and called on George to paint all the signs for the school’s science fair projects.

The largest sign he completed this summer was 10 by 42 feet. It was for a fishing supply and bait store and showed two men in a boat hooking a large bass. His largest order was $200 worth of signs for the North Topeka Saddle Club.

With his profits, George has purchased a guitar and amplifier, window fan, school clothes and has helped with expenses at home.

And he credits his parents, Mr. and Mrs. Dewey Collins, for much of his business success. Because he is too young to drive, they have transported him, paint and ladders to jobs as far as Holton. When a sign board must be built, George hires a carpenter. Usually his customers have sign boards they want re-painted or George paints the sign directly on the place of business.

As for his future plans, George thinks he would like to be an architect if he can paint his way through college. He will have to cut down on the number of jobs he accepts, but he plans to continue with his sign painting business during his sophomore year at Highland Park High School. [end] 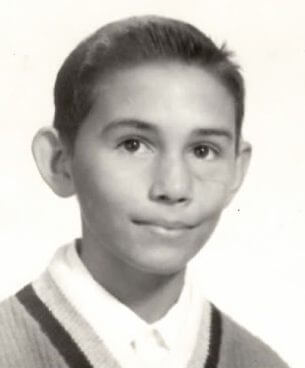 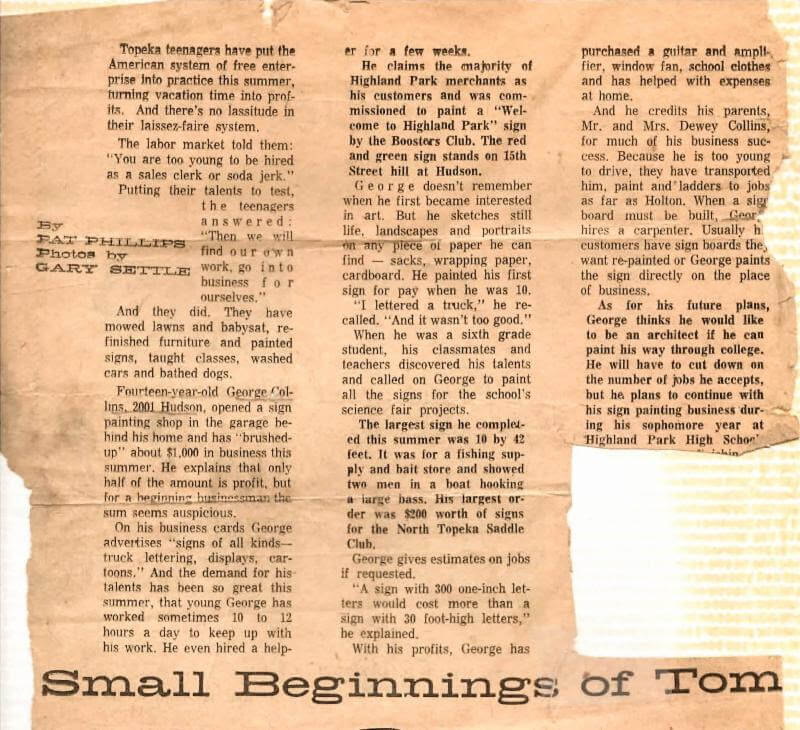 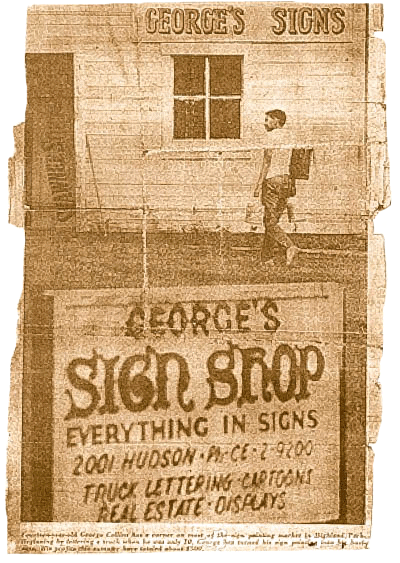 Well, there you have it, the humble beginnings of George Collins.  His company, now Collins Visual Media, is the leader in film and commercial sign props for the film industry. He and his daughter have also created Step and Repeat LA, the premier step and repeat company, producing celebrity backdrops for red carpet events.